Dietary recommendations for when your patients ask, “What else can I do?”

Glaucoma is one of the leading causes of irreversible blindness worldwide.1 It is commonly treated with prescription eye drops and surgical procedures. Often, our patients ask if there is anything else they can do to prevent or reduce the chance of the disease progressing.

Research shows that some dietary supplements may help lower the risk of developing glaucoma and potentially slow disease progression.2 Dietary supplements are meant to be used as adjuncts to traditional therapy, including prescription eye drops and surgical interventions. We always ask our patients to speak with their primary care physicians before adding any supplements to their diet, as there may be contraindications for those who are taking blood thinners or other systemic medications.

Before suggesting dietary supplements to a patient with glaucoma, it is important to understand the pathogenesis of the disease. We know that elevated IOP, whether from decreased aqueous outflow or from an imbalance in aqueous production, is related to retinal ganglion cell (RGC) death,3,4 a hallmark feature of glaucoma. Elevated IOP also causes mechanical stress and strain on the optic nerve.3 Other causes of optic nerve damage and risk factors for glaucomatous RGC death include vascular dysregulation leading to impaired microcirculation, decreased ocular blood flow and perfusion, mitochondrial dysfunction, and oxidative stress.3-6

The supplement options suggested below and the Table on page 48 have properties that are being investigated for their potential to lower IOP by increasing aqueous outflow, decreasing oxidative stress; shielding the optic nerve from damage and RGC death through neuroprotective effects; increasing ocular blood flow; and/or mitigating mitochondrial dysfunction. 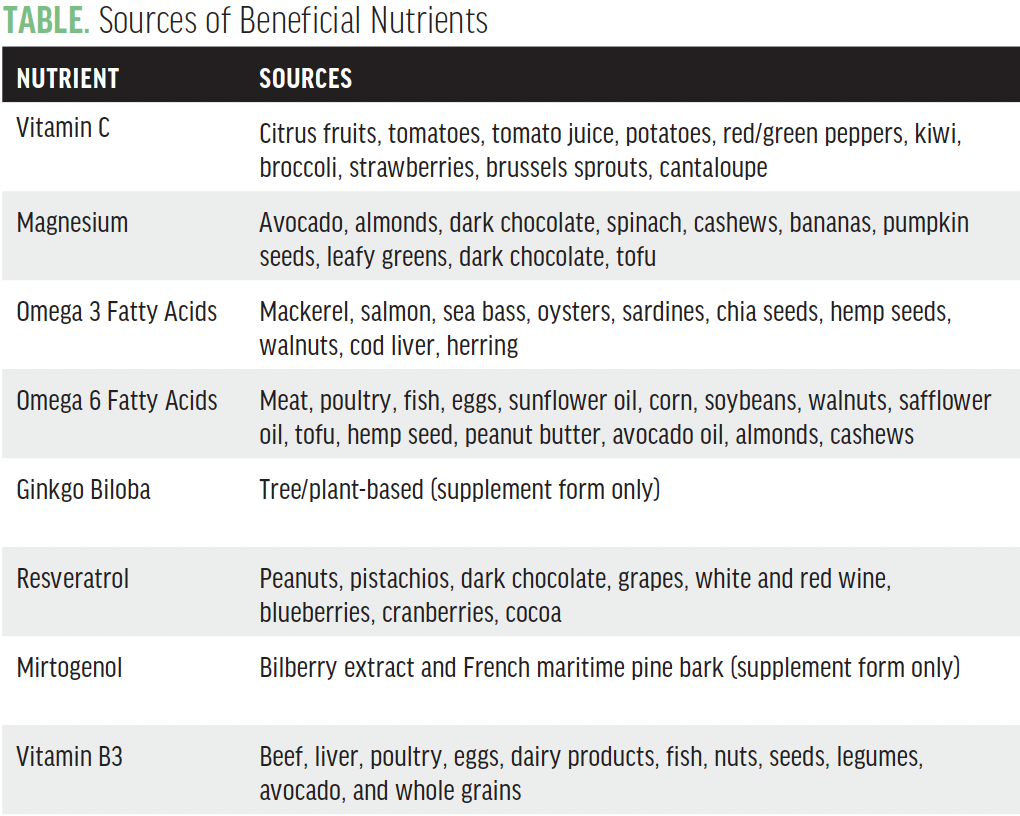 Vitamin C is a strong antioxidant that has the potential to protect the optic nerve against oxidative stress.7 One study noted that vitamin C levels were significantly lower in patients with normal tension glaucoma (NTG) than in healthy control patients.8 However, evidence on whether receiving vitamin C supplements is protective against glaucoma is mixed. Another study showed that vitamin C given intravenously lowered IOP by 20%, but that over a period of 10 to 12 hours, IOP returned to baseline.9 Vitamin C appears to have a significant osmotic effect, similar to mannitol, but intravenous supplements are not practical.9 Further studies showed that vitamin C taken orally had no effect on IOP.9

Magnesium may help patients with glaucoma by improving ocular blood flow.10 It also has a neuroprotective effect by inhibiting the release of glutamate, a compound that can induce oxidative stress and cause damage to the optic nerve.10 One study showed that patients with glaucoma taking a supplement that included magnesium—along with homotaurine, carnosine, forskolin, folic acid, and vitamins B1, B2, and B6—demonstrated a statistically significant reduction in IOP, as well as improved light and contrast sensitivity.11

Another supplement for the treatment of glaucoma that has recently gained interest is vitamin B3, also known as niacin, and one of its derivatives, niacinamide. Low niacin intake has been linked to an increased risk for NTG and primary open-angle glaucoma (POAG).12,13 There is particular interest in the coenzyme nicotinamide adenine dinucleotide (NAD+), which comes from niacinamide. A recent paper concluded that certain crucial deficits in glaucoma can be linked to a deficit in NAD+ and resulting mitochondrial dysfunction.14 A recent large, collaborative preclinical study spanning seven countries used rodent models to simulate glaucoma and found that nicotinamide had neuroprotective effects, suggesting that this supplement is worth testing in human clinical trials.15

The essential fatty acids (FAs) omega 3 and omega 6 may help decrease IOP by increasing aqueous outflow.16 A study evaluating the blood composition of FAs in patients with POAG noted that these patients had reduced levels of eicosapentaenoic acid (EPA) and docosahexaenoic acid (DHA) compared with healthy individuals.17 An animal study suggested that a diet high in omega 3 FAs was associated with lower IOP.16 Another study showed that an increase in oral omega 3 consumption significantly increased aqueous outflow and lowered IOP in patients with NTG.18 The mechanism of this increased aqueous outflow is activity of prostaglandins, which are metabolites of omega 3 FAs.19 Treating patients with glaucoma using prostaglandin analogs is a mainstay of current best practices.

Ginkgo biloba is one of the most promising supplements for glaucoma treatment. It is known to have antioxidant properties, help increase blood flow, stabilize mitochondria, and protect neurons from damage.20 The major components identified in ginkgo biloba are known as flavonoids, which are polyphenol compounds found in plants that have both neuroprotective and antioxidant properties.21 A meta-analysis on the effect of flavonoids in patients with glaucoma and ocular hypertension (OHT) showed that flavonoids appeared to play a part in slowing the progression of visual field loss.21 A randomized, double-blind, placebo-controlled crossover study showed that oral supplementation with antioxidants, including ginkgo biloba, produced increases in biomarkers of ocular blood flow in

Mirtogenol (Horphag/Indena) is a dietary supplement that works similarly to ginkgo biloba. It is a combination of two phenolic extracts taken from bilberry and French maritime pine bark.25 Previous studies have demonstrated that Mirtogenol can be helpful in treating glaucoma by improving ocular blood flow and lowering IOP. In one study, Mirtogenol lowered IOP in patients with OHT who did not yet show signs of glaucoma.26 Another study noted that Mirtogenol, when used in combination with the prostaglandin analog latanoprost ophthalmic solution 0.005% (Xalatan, Viatris), had a synergistic effect; patients who received both latanoprost and Mirtogenol had significantly lower IOP and improved retinal blood flow compared with patients who took latanoprost alone.25

Resveratrol is a plant polyphenol. Clinical studies have shown that resveratrol has strong antioxidant and anti-inflammatory properties, as well as neuroprotective and anti-aging effects.27 It may also improve mitochondrial dysfunction.23 In a literature review, one study demonstrated resveratrol’s antioxidative and antiapoptotic roles in the trabecular meshwork cells by noting a decrease in inflammatory markers and cellular senescence markers consistently observed in patients with POAG.27 Another study showed that treatment with resveratrol considerably slowed the apoptotic process, helping to maintain normal mitochondrial membrane potential and enhancing cell survival.27

Dietary supplements are gaining popularity in health care. Providing our patients with information about which supplements to take can help them navigate the abundance of options out there. This list is not exhaustive, and there are many other supplements that show promise in helping to slow the onset and progression of glaucoma. Although there are limited data on nutritional supplements for glaucoma, this is an exciting area of study with a lot of future potential.

The authors would like to extend a special thank you to Zac Denning for his help in providing research sources for this article.